We said our last goodbye to the gorgeous, badger-faced old man Ty at the weekend, after almost 2 and a half years of his companionship.

He first arrived with us in February 2015, with his brother Harvey, who he was absolutely inseparable from until we lost him just back in December. They were only 5 weeks old when we brought them home and knowing them since they were such tiny babies made watching them grow up all the more rewarding.

He was forever our “Shy Ty”, always cautious about new people and things but always content in the rat and human company of those he’d got to know.

He was taught the ropes in life by our old men Chae and Winnie, two lovely boys who lived with Ty and Harvey as soon as they were old enough, and he grew in confidence growing up in their well-balanced group. 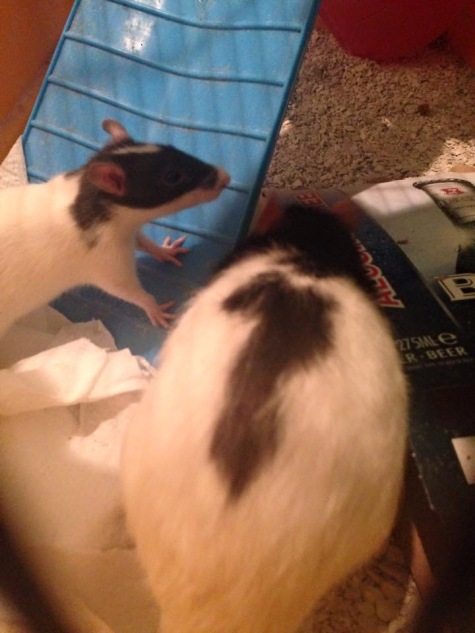 Ty with Harvey, Winnie and Chae over the years

Last year, when we added Reuben and Perry to our family, Ty did throw us a curveball proving things don’t always go to plan, and became temporarily nicknamed the “Tyrant” as a result of his unexpected refusal to accept new cagemates. The only thing that maybe could have helped him calm down was neutering, but at already 2 years old we decided not to, so settled to just keeping Harvey and Ty together and the younger boys separate – and later once he lost Harv, Ty did seem to appreciate the company in the next cage as well as ours, even though he was not to be persuaded to share his cage.

Ty was a lovely boy – he loved his brother unbelievably, we’ve never had two rats as constantly snuggled together as them, and was very affectionate with us too – as an older soul I’d just carry him about everywhere in my arms and he’d be happy as long as he was being stroked.

Although he was showing his age in the last few weeks, his departure this weekend did take us a little by surprise, as without any illness and having seemed bright and animated an hour before he just went to sleep – a bit of a shock for us but for him the most wonderful way to reach the end of his time with us.